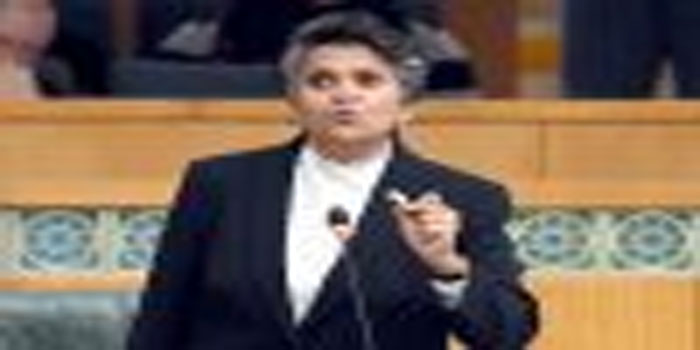 MP Safa Al-Hashem said yesterday that she received a threat to her life after calling on the government to impose charges on expatriates for everything they do, including taxing the air they breathe in the country. The lawmaker told the electronic edition of Al-Rai newspaper that it was the second time she received death threats – the first was several months ago when she made similar statements to tax some 3.3 million expatriates in the country.
The lawmaker said the threat was sent through email and she filed a complaint with the interior ministry, asking the cybercrime unit to identify the culprit. Hashem, the only female member in the 50-seat National Assembly, has frequently issued controversial statements highly critical of expatriates, calling to tax them for walking on roads and for breathing air. Hashem had also threatened to grill Minister Of Social Affairs and Labor Saad Al-Kharraz if cooperative societies continue recruiting expats from a certain Arab state, describing the matter as an “unusual invasion”.
The lawmaker has repeatedly and openly called for sharply reducing the number of foreigners in the country, accusing them of competing with native Kuwaitis for various public services including medical treatment at public hospitals. Many social media activists however accused her of making such statements only to gain popularity among a certain section of Kuwaitis and to boost her chances of re-election in the forthcoming general polls scheduled for late next year. On Sunday, social media activists strongly criticized her on Twitter for being racist, while others backed her.
Meanwhile, MP Riyadh Al-Adasani warned the government of a “flurry” of grillings against ministers and the prime minister if the government does not deal effectively with key security and economic issues. He said that the government’s method of calculating subsidies for services and commodities is incorrect and exaggerated and demanded a rational way of doing it.
MP Al-Humaidi Al-Subaei also threatened to grill Kharraz for suspending social aid to needy Kuwaiti women, adding that so far, aid to 3,000 Kuwaiti women has been cut without justification. Opposition MP Shuaib Al-Muwaizri demanded yesterday that the defense and interior ministers should fully explain to the public true facts about the drone that flew over HH the Amir’s residence. The lawmaker questioned if the drone was a threat message from outside or from within the country.