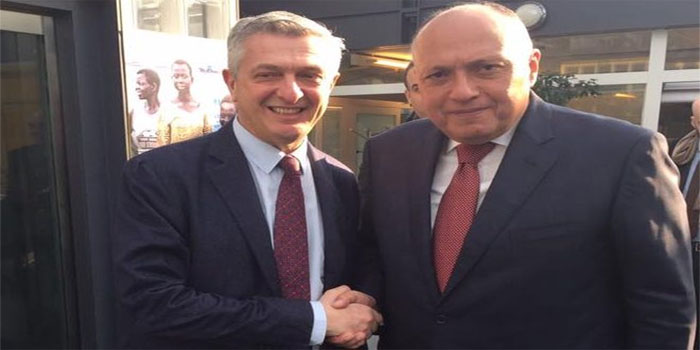 Egypt’s Foreign Affairs Minister Sameh Shoukry affirmed that Egypt is at the forefront of countries concerned about the refugees issue, during his meeting with UN High Commissioner for Refugees (UNHCR) Filippo Grandi held in Geneva on Tuesday.

Shoukry clarified that Egypt’s keenness on the issue is based on legal and moral considerations, and away from attempts at propaganda or political recruitment.

In this regard, he suggested that it is necessary to allocate more resources to the work of the UNHCR office in Egypt and to assist the state in carrying out these burdens.

During the meeting, the foreign minister expressed his appreciation for the important role played by the UNHCR office in Egypt, praising the scope and the history of the extended cooperation between Egypt and the UNHCR since 1954.

Moreover, Shoukry reviewed the national efforts to address illegal migration flows and the success of the security authorities in controlling the borders and any illegal migration boats from leaving Egyptian coasts to Europe since September 2016, in addition to the important role played by the National Coordination Committee for Combating and Preventing Illegal Migration and Trafficking in Persons.

For his part, Grandi expressed his great appreciation for the efforts and services provided by Egypt to refugees on its territory, considering it a model for many countries, especially what has been provided to Syrian refugees and efforts to reunite Syrian families.

According to the Foreign Ministry’s spokesperson, the meeting discussed the developments of the on going negotiations to formulate the Convention Relating to the Status of Refugees, in which Shoukry expressed Egypt’s role in this context, pointing out the advanced priority that Egypt attaches to these negotiations.