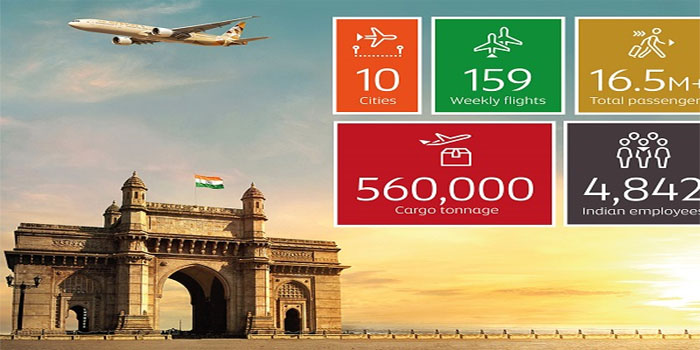 Etihad Airways, the national airline of the United Arab Emirates, is preparing to celebrate 15 years of service to its largest and busiest market, India. The airline’s milestone coincides with the third visit to the UAE of India’s Prime Minister, Narendra Modi, highlighting the importance of the partnership between the two countries.
The airline had kicked off its daily operations to India from its hub, Abu Dhabi, in September 2004, starting with flights to the commercial city of Mumbai. Three months later, services were launched between Abu Dhabi and New Delhi, said a statement from Etihad.
Today, the Emirati carrier operates 159 return flights per week between Abu Dhabi and 10 key Indian gateways – Ahmedabad, Bengaluru, Chennai, Kochi, Delhi, Hyderabad, Kolkata, Kozhikode, Mumbai and Thiruvananthapuram – and through its Abu Dhabi hub, the airline connects each of these gateways to international destinations throughout the Middle East, Europe, the Americas, and Africa, it stated.
Since launching operations to the sub-continent, Etihad has carried more than 16.5 million passengers on its Indian routes.
Etihad Airways Group CEO Tony Douglas said: “India and the UAE share a long and strong economic, cultural and diplomatic relationship, and Etihad Airways connects these nations to each other, and beyond. We serve more destinations in India than any other country in our network, and connect India to the world via Abu Dhabi.”
“Globally, we employ more than 4,800 Indian nationals, almost 25 per cent of our workforce. We contribute strongly to both economies, and last year spent $151 million with 480 companies in India. Our commitment is significant, and will continue to grow,” he added.
Etihad’s offering in the India market continues to evolve. The airline is continually increasing flights and adding newer, larger aircraft, including its latest addition, the Boeing 787 Dreamliner, which serves cities including Mumbai, Delhi, and Hyderabad.
As a minority shareholder in and key partner of Jet Airways, Etihad was able to improve international connectivity with India, via Abu Dhabi, said the company in its statement.
Even after Jet’s flights were suspended earlier this year, Etihad worked consistently and constructively to help revive the Indian carrier, and continues to explore opportunities to collaborate with other local partners to help serve this rapidly-expanding market, it added.
Etihad Guest, the airline’s loyalty programme, recently partnered with SBI Card, one of India’s largest credit card providers, to offer a unique travel-specific Visa credit card to Indian travellers.
And for guests flying Etihad from India to the United States, the Customs and Border Protection facility at Abu Dhabi Airport, enables US immigration, customs and agriculture formalities to be completed in Abu Dhabi before departure, it stated.
On the cargo front too, India is an important strategic source market for the Etihad Group.
In addition to belly space cargo capacity on the 159 weekly passenger aircraft between Abu Dhabi and India, Etihad Cargo operate dedicated freighter flights to Delhi, Mumbai, Bengaluru and Chennai. In the past decade, Etihad has carried more than 560,000 tonnes of cargo to and from India, from general cargo to key Indian exports including garments, perishable products, pharmaceuticals and electronics, said the statement.
Etihad also continues to support India through a range of corporate social responsibility initiatives, including its Global Education Project to provide or raise funds for new education facilities and supplies.
The airline also runs workshops to develop skills and support the empowerment of women, and provides aid to assist after natural disasters such as floods in Kerala, where it provided fresh water, clothes, blankets, kitchen utensils and hygiene kits to more than 1,000 people located at a relief camp in the state, it added.
-Trade Arabia